What is Freedom Cells (freedomcells.org)? First, think about the people you know. How many of them share your opinion about the future of the decaying custerfluck known as Western liberal democracy? All of them? Some of them? A few of them? Hopefully not none of them..

The importance of community

If there is one positive thing that has come out of the plandemic, it is the heightened consciousness of the importance of community. I’m sure that anyone reading this has more sympathy with self-reliance, narrowly defined, than communitarianism. Yet we dogged individualists have been forced to appreciate how easily solitary rebels can be dragged down by an ovine majority, and how important it is to bind together with others to create a different kind of self-reliance.

Naturally there are distinct varieties of defensiveness, and therefore distinct kinds of communities to satisfy them. NoHypeInvest is a virtual community focused on the creation of financial defences. This is important, but not sufficient. We also need to satisfy our emotional and spiritual needs. Beyond those, we also have numerous practical needs – food, shelter, utilities, services.

(no matter where in the world you are)

We therefore need like-minded communities that are more geographically and emotionally immediate, in case these needs become difficult to meet from conventional means. These kinds of communities are difficult to conjure up when societies are increasingly fragmented and voices are being silenced. More pertinently, they are hard to establish when people have become so used to a dominant nanny state and its associated facilities that they cannot grasp the necessity for any alternative.

What is needed are pioneers and visionaries to inspire the sluggish. Some of you may have heard of the American voluntarist Derrick Broze.

Broze is one of a small group of secular prophets who have long advocated intellectual and practical independence from the toxic mainstream, as a matter of survival rather than mere preference. His call for ordinary people to look for ways to create parallel systems (what he calls ‘counter-economies’) has never had greater appeal in the light of the forced partial shut-down of the global economy, and the deliberate destruction of supply chains.

A number of years ago, Broze established the Freedom Cell initiative. Rather than paraphrase their aims, here is the one sentence description of the site:

“Freedom Cells are peer to peer groups organizing themselves in a decentralized manner with the collective goal of asserting the sovereignty of group members through peaceful resistance and the creation of alternative institutions.”

Broze’s call for greater community and autonomy is based on an understanding that the social and economic structures and infrastructure that we have become dependent on may not be available in the future – either because they will disappear altogether, or because dissidents will be denied access to them. There is a great deal of focus within contemporary dissident communities on the promise of blockchains, open-source initiatives and proof of work/stake verification to help build alternative economies, but these will only get us so far. Building a counter-economy entails physically interacting with other people and sharing old-fashioned skills, so making contact with the right people in a timely fashion is essential.

What is Freedom Cells (freedomcells.org)?

Broze’s Freedom Cell site is that rare thing – a social media site which sets out to make itself redundant. It exists in order to bring people together in real time and space, who would otherwise never have connected, to create counter-economies.

The method is simple. On signing up, members can place themselves on a map (anywhere in the world) and see other members in their neighbourhood.

How to create a cell & add location:

It’s then up to individuals to make contact with each other, and establish their own local ‘cell’. Broze suggests that members focus on sharing skills and resources, but these are personal choices, as befits a voluntarist initiative.

In historical terms, this is hardly a novel idea. Throughout history, misfits have forged tight-knit bonds to withstand pressure from the mainstream. A classic example were the minutemen, local militias drawn from American colonists fighting the British, designed to be mustered at ‘a minute’s notice’.

A book published in 2020 by the American Rod Dreher (‘Live Not By Lies: A Manual for Christian Dissidents’) details the tactics deployed by Orthodox Christians suffering under hostile Soviet governments during the twentieth century. Faced with often severe persecution, they survived by creating local networks that sustained each other with practical, emotional and spiritual support. They also provided conduits for the hand-written or typed samizdat which stiffened resistance to communism. Dreher isn’t just writing for idle interest; he believes that Christians, and others, will be needing such networks again in the near future. One does not have to share his prognostications of doom to understand the value of the idea. 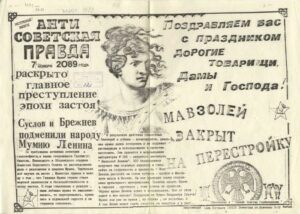 Broze himself is obviously conscious of other historical parallels. A relatively new initiative on the Freedom Cells site is an attempt to organise a contemporary version of the ‘underground railway’ which helped runaway slaves in the US escape to freedom. In this modern version, Broze is focused on helping people to get across the border of the US to relative freedom in Mexico. He asks people not to sign up unless they are actually seeking immediate assistance, so I’m afraid I am unable to provide a proper account – being smuggled from rural Shropshire in England to the Mexican border would be beyond even Broze’s powers

As for the Freedom Cell site itself, it is pretty basic, and the interface can be clunky and slow, but complaining about this is to miss the point. Its function is to encourage face-to-face interaction, so technical sophistication is superfluous. If you aren’t interacting in other ways after a few messages, you aren’t doing it right.

Does it work? (my personal experiece)

So, does it work? I first joined the site in its first iteration, at a time when you could count members on your fingers. I was one of only two or three people in the UK, and we were all miles away from each other, so I didn’t even bother contacting the others. I didn’t want penpals; I wanted a local community. For several years I completely forgot about the site and my membership was dormant. I’ve no idea how well the site did during these intervening years, but the plandemic was the transformative factor.

Suddenly the site exploded, with thousands of new members, including in the UK, and struggling with the interface began to have a purpose.

I struck lucky, because the very first person I ever made contact with on the site has become one of my best friends. We were living within six miles of each other as the crow flies, but as two out of more than a million in Greater Birmingham there is no way we would ever have met without the Freedom Cells site. We haven’t 3D-printed a gun or incubated chickens yet, but his friendship has been pivotal to me, as he has filled in gaps in my understanding and piqued interest in things that were hitherto unknown to me. I can’t think of a better testimony to the value of Broze’s site – highly recommended.

There are more than one way to skin a cat so to speak, and I have recently written about another way for you to find your tribe of like-minded by simply leaving your draconian western country and go and live in central america among other freedom seeking libertarians in “custom made communities” that also suits a wide variety of budgets aswell:

I hope you found this short post on what Freedom Cells (freedomcells.org) is and what it is all about. Hopefully you now have a better understanding in the subject and can easier decide if it is something you might want to get involved in or not. Please share your own experience in the comment section below! Also, if you got any questions about this I would be more than happy to answer them below!

Much love to you!

John, founder of No Hype Invest