Bitcoin continued to consolidate against the lows and provided us with some upside in the price action.  This action is certainly bullish in nature, and very nice to see especially during this period of increased downside risk near the end of this 60 day cycle.  The news cycle has remained fairly benign so this price action has been driven by technicals and fundamentals for the past couple of weeks.  However, weakness is still lingering and we must be careful until it passes.

The weekly chart closed last week on a red TD 1 candle with a higher high, followed by lower low.  This candle was an orange pivot due to the large correction that occurred almost immediately after we made the higher high.  This correction occurred in the resistance area we have been targeting for almost 2 months.  The TD series was perfected with the higher high on the 7 count and we are now officially in a 1-4 week correction.   This confirmed a 1-4 week correction is indeed in effect and we are currently working on a red TD 2 candle.  Squeeze Momentum has officially crossed into positive territory over the past week and will now keep downside limited on this time frame.  CMF continues to show more dollars flowing into bitcoin at the weekly scale.  The risk of downside move remains before this 1-4 correction is completed and confirmed so we will continue to accumulate lows in a more conservative fashion until we have confirmation that a bottom is indeed in place.  MACD is decelerating while StochRSI also undergoes a necessary cool off period.  The RSI remains above 50 in bullish territory.  The weekly 50 SMA is now at the $38.1k and it should provide additional support in case of a final move to the downside in this correction. Buying the dip remains the name of the game on the weekly scale.

The daily chart is showing us the need to continue being careful for another week or so.  The 50/200 day SMA Golden Cross has been confirmed and that is a very good bullish signal. However, we can see that price has already reached a resistance area near the purple horizontal line and has been unable to hold above it.  StochRSI, RSI, MACD, iFish Smooth are showing bottoms that are likely in place.  The CMF is trending down as more dollars exit the market but the underlying strength shows someone is accumulating this dip.  This view is also supported by on-chain fundamentals showing whales are accumulating and the fear phase has already passed. The current candle on this daily chart is an orange pivot, yet another warning to be careful until get past this dangerous timing zone.  The $37k area remains the ultimate buy the dip zone and it really is best if we remain above it.  As we have been saying for a few weeks now, a higher low above $37k will confirm the intermediate trend change from bearish to bullish.

The 4-hour chart shows a red TD 9 candle which could be the bottom for today over the next few hours.  It would be a nice bullish signal for the weekend if price can hold this area this afternoon.  Shorter term traders who are following our signals from the 4-hour chart trade ideas should stick to the plan and buy at the price levels we issued earlier this week.  Buying the more extreme moves to the downside in the blue ocean area is a great location for both short term traders and long term investors to enter Bitcoin positions.

The daily XMR/BTC chart unfortunately has a bearish bias after an imperfected TD 9 bearish correction to the upside.  Bears stepped in quickly during the price spike and we are once again trading against the bottom of the range.  Note that price is trading inside the intermediate term OTE buy zone with support near 0.0051 level.  The 50 SMA has now crossed the rising 200 SMA in a death cross.  StochRSI and MACD have bullish divergences while Squeeze Momentum has turned around and started trending up for the past week, helping keep downside more limited.  The plan remains to continue to accumulating these lower levels in anticipation of the upcoming bull market in the Fall and Winter

The XMR/USDT daily remains in a bearish stance and has been unable to move above the Golden Cross which is an unfortunate turn of events for the bulls.  Bulls need to show strength and push prices above it or we will have a failed Golden Cross that will lead into lower levels. $223 is the first area of support below and we have an intermediate term green box OTE buy zone below that.   The longer term bull market remains in effect for now and it should resolve to the upside if bulls can hold their ground and start showing strength over the next few weeks.

ETH/BTC topped at the OTE short zone and is now painting an ugly orange pivot candle for the second time in 7 days.  This is a warning sign that bearishness is in effect while Squeeze Momentum just flipped negative opening the doors for downside movement.  All indicators appear to be moving downward and even the CMF started to show a slowing down in the flow of BTC into ETH.   The green box below remains the most optimal place to buy and the opportunity to do so at lower levels  is looking more likely with the weakness we are seeing today.

The ETH/USDT pair has also been unable to move above the red box OTE short zone above and is now failing with an orange pivot candle today.  Squeeze momentum was negative while MACD was trying to move up, so it kept upside limited and allowed the bears to push prices down today.  CMF is now showing a slowing down of the dollar inflow, and sellers are taking control. We will continue to stick to the plan with this pair and buy any moves down into the mid $2000’s if we can. 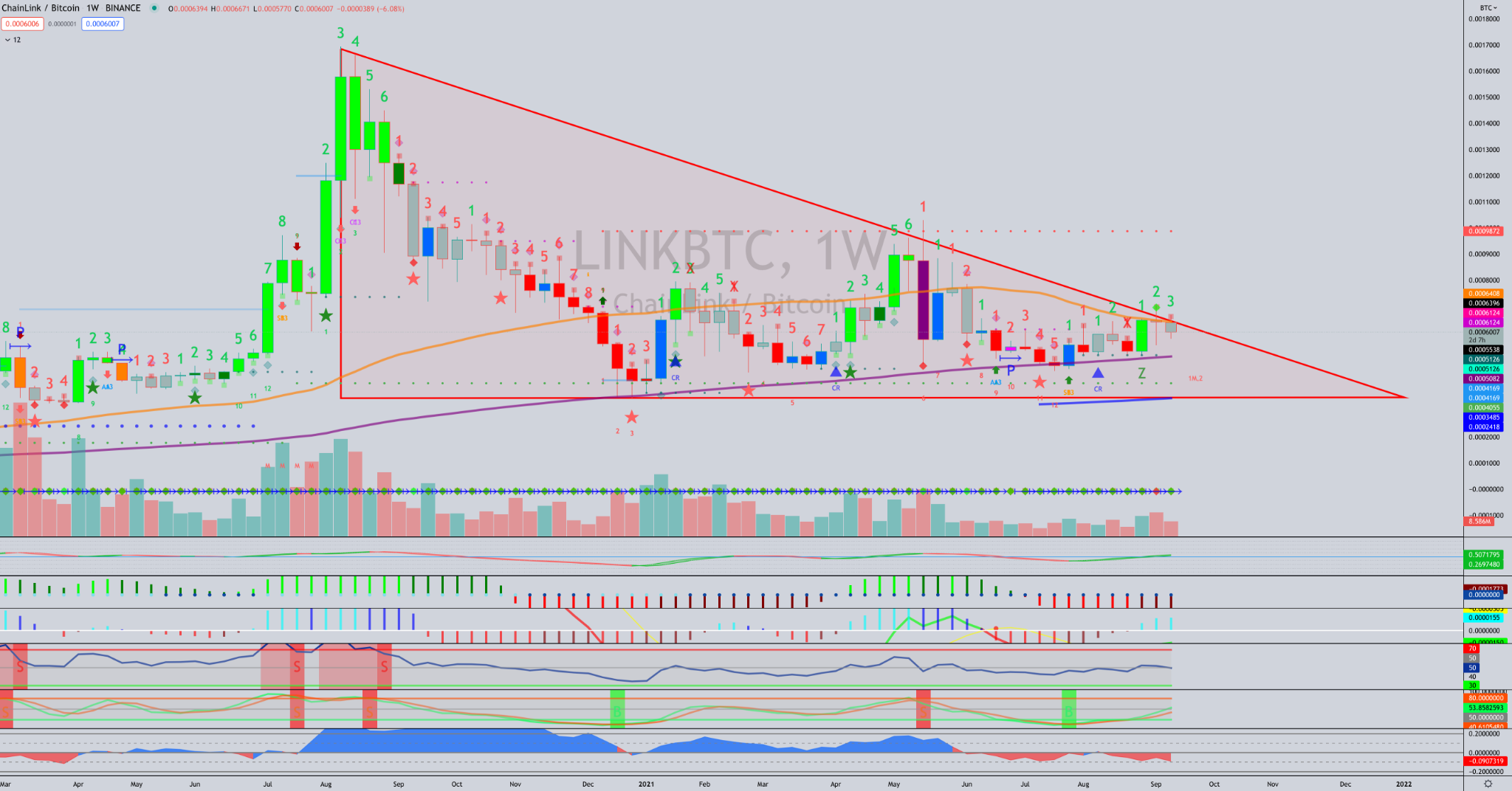 Today we have a look at LINK on the weekly scale.  This coin was the earliest to have a bull run while the rest of the market was still in a bearish phase.  We are on a weekly green TD 3 that has plenty of room to move to the upside.  However, we can see it has been stuck in a bearish triangle pretty much the whole time since Bitcoin started its own bull market.  LINK recently attempted to break out above the triangle once again but is failing.  Squeeze momentum is accelerating up along with MACD, StochRSI and RSI but CMF continues to show sellers are unloading more coins than buyers.  LINK will continue to underperform Bitcoin as long as it remains stuck inside this triangle.  This breakout outside of the triangle will likely occur when the entire crypto market moves up in a final parabolic move.  It is best to accumulate at lower prices while we wait for this to play out.

LINK has also been weak in the USDT pair side of things at the weekly scale but is faring better than the BTC pair. It appears we have topped out on a green TD 7 just below the red rectangle OTE short zone.  A 1-4 week correction is now in effect. CMF still shows that sellers are outnumbering buyers, while Squeeze Momentum trends up. It is best to be patient, wait for lower prices on this pair and look to buy as close to $20 as possible.

The next few days are going to tell us the story.  We have been shown bullishness from BTC during the end of this 60 day cycle in an unexpected fashion.  Sideways continuation would bring even more bullish action in the fall.  A bearish sell-off  into our buy zones remains a possibility. We must remain cautious until we get past this dangerous timing zone before getting more aggressive with trades.